c0de
/
pixopixel
mirror of https://github.com/alopexc0de/pixopixel
Fork 0
Code Issues Projects Releases Wiki Activity
PIXO Pixel is a 16 x 16 RGB LED display that runs off of an ESP32
You can not select more than 25 topics Topics must start with a letter or number, can include dashes ('-') and can be up to 35 characters long.
23 Commits
4 Branches
0 Tags
9.5 MiB
C++ 73.5%
C 26.1%
Python 0.5%
Branch: master
Better_Readme
fw_cleanup
master
wifi-startup
Branches Tags
${ item.name }
Create tag ${ searchTerm }
Create branch ${ searchTerm }
from 'master'
${ noResults }

This project is open source!

If you want to build this yourself, you can find the Bill of Materials here on FindChips.

I have submitted a pull request to the Arduino-ESP32 github: https://github.com/espressif/arduino-esp32 to have the PIXO Pixel have its own board file. This will ensure the pinout that was used will match the pin declartion on the board. In the meantime, please use the "Adafruit Feather ESP32" in the board manager, as the pinout is the same.

Install these to your sketchbook's libraries folder, usually located in YOUR HOME/Documents/Arduino

Note Arduino IDE was complaining about i2cdevlib being invalid as the installation instructions are a bit unclear. It seems that the ESP32 is not officially supported for use with these libraries, and I had to apply a patch (#367) to get no compile errors.

There's a whole bunch of other commits in here, but this seems mostly to be a mix of: feature adding, bug fixing, and various other changes that may or may not be related. Feel free to experiment with these at your own discretion.

This was a Make100 Kickstarter that was recently fulfilled 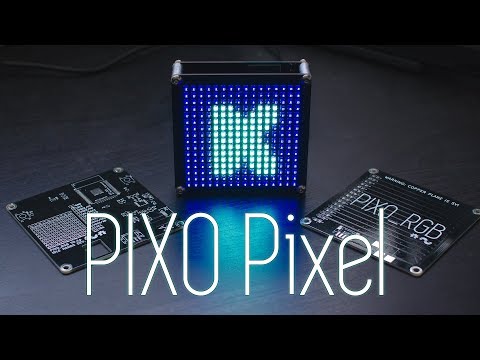